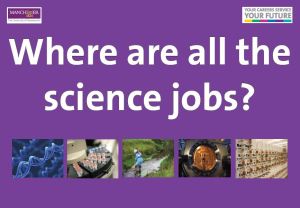 If you’re a science student who loves science, it can sometimes feel like all the jobs are for business students, engineers or computer scientists. This is to reassure you that there are ways of finding science jobs – if you know where to look.

a) Look for science jobs which are being advertised

Where to look for science job adverts – some starting points

How to look for potential scientific employers

If you want to do cutting edge science, don’t just think of the big household names – think small!

Why? Because science which emerges from fundamental academic research is often based in start-up and spin-out companies, often located around universities, in “incubation centres” (ie. very small emerging companies – may not be too many roles for new scientists here) and science parks (companies which are starting to grow might be a better bet for science jobs for recent graduates).

How can you find these companies which you’ve never heard of? Try these approaches:

What to do once you’ve found a suitable scientific employer