Can you stop the difference between this version of Sam’s CV and the one published on Friday?

Sam doesn’t have to put everything on his CV – but he has to put on the stuff that’s going to get you to interview.

You may notice that Sam has some gaps on his CV. He left school in 2008 – but didn’t start university until 2011. Did Sam make a mistake? Or are there things missing from his CV? Sam didn’t make a mistake, he did one thing applicants commonly do:

To prevent this from happening in the future, I’ve suggested to Sam that he keeps a diary, a portfolio, or simply takes time to update his CV every few months.

Something he did that is less common, but I have experienced several times with students from countries all over the world:

We discussed Sam’s concerns and established:

Many people work with the family business – Lego, Bechtel, Hermes Group are just a couple of high profile organisations which are still in the family. It doesn’t matter if you are working as part of a family business (or volunteering: “I wasn’t getting paid” is another reason students give for excluding or minimising this sort of experience) or an international conglomerate – potential employers are going to be focusing the skills, experience and evidence that you are marketing to them.

Speaking of gaps on CVs – it’s best if you don’t have them.

Here’s some advice for applying for graduate jobs and for more experienced candidates.

Your university qualification – whether undergraduate, Masters or PhD needs ‘translating’.

University study takes up an enormous amount of your time – even if ‘only’ a year for a Masters or Diploma.  Employers need to know what, if anything, that gives you in terms of relevant skills and experience.  In terms of this role, Sam:

If Sam’s experience had been less directly relevant, he could have drawn extensively on transferable skills from group work, research, writing, presenting and more.

Drawing out the relevant experience

Elsewhere in Sam’s CV, you may notice where not much seems to have changed except for a few tweaks in language.  You can see from the highlighted version of the job advert where we’ve identified key criteria Sam needs to link to his CV:  Enthusiasm, communicating excitement, working on the ground and online, developing activities, working with volunteers/mentoring, eye for detail, relevant subject area. 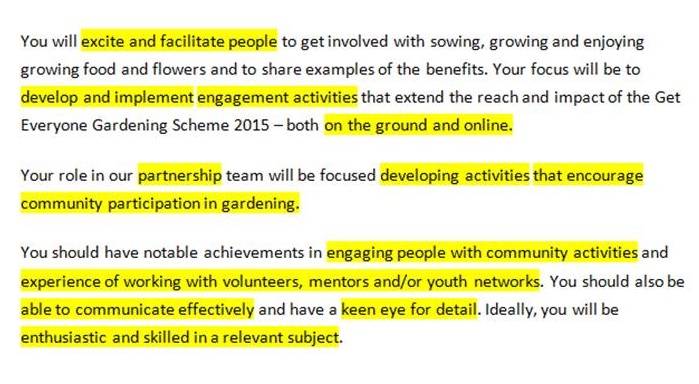 As with many students, Sam’s recognition of his own accomplishments only emerged when he came to a careers consultant to talk about his CV for a specific job.

I’ve suggested to Sam that he ask for some feedback from friends and family to get a more rounded picture of his skills, abilities and achievements – as well as areas to think about improving, or ideas for filling any gaps that emerge.

Is this the end for Sam’s CV?

Probably not.  Arguably, there may be more that Sam could do to get his CV in shape for this role – and let’s not forget his covering letter (which we haven’t looked at. Yet.).   Are there further suggestions you’d make?

The most important thing is whether or not Sam feels his CV is now telling the story about his experience that he wants to tell the employer.  Prior to seeing this advert, Sam hadn’t thought much about his CV, and it’s all been a bit of a rush trying to pull it together.  Discussing his application has helped recognised his achievements, identify some of the gaps he has in relation to the role and helped him develop a more nuanced perspective of the application process – it’s hard work, requires self-awareness, critical thinking and time.

Sam recognises now that a CV is a living document – it will need updating, as well as tailoring to specific vacancies in order to be effective.

Actually, is Sam even a real student?

You may come across Sam in other University of Manchester Careers Service resources.  I’ve based my version of Sam on several students I’ve been acquainted with over the years to highlight critical areas of CV writing.