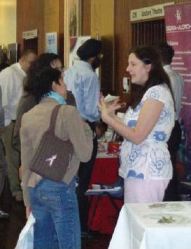 You’ve found someone you think could help with your career, your degree or your research. You’ve steeled yourself to approach them – and you’ve been knocked back, or simply ignored. What do you do?

“Networking” can be daunting for many postgraduates but it’s an important skill which can improve your chances of finding specialist jobs in your field or exploring alternative careers. It’s also critical if you want to become a successful academic – other academics need to know you and your work if you want an academic career.

It’s a risky stance to decide that networking isn’t for you and just to give up, but you don’t want to be seen as a pest. Here are some suggestions for learning how to get it right next time, if you’ve just been knocked back:

Does the person you approached know you, or were you “cold calling” them?

No reply to your email?

They seem vague or reluctant to help?

For a lot of people, networking isn’t something that comes naturally, but it is something you can learn to do better. The first step is to forgive yourself for not being perfect, dust yourself down and try a different approach.

I’d love to hear any other suggestions, questions or advice – just drop me a comment (below).