If you’ve ever been to a management consultancy interview, you’ve probably encountered “the case study”. They’re also used for a range of jobs to probe your commercial awareness and business problem solving ability, and they can be challenging if you don’t know how to approach them.

I blogged about this last year on the old postgrad careers blog, but as it’s still relevant to those of you going for consultancy this year, here’s the recycled version. However, I’ve also added some new resources to investigate for further support (see the end of this post).

What is a case study interview?
In a case study, you are generally given a business problem, but one where you wouldn’t be expected to have a ready-made answer.

For example, it might be a company trying to decide whether to launch a new product or expand into a new market; a private equity company trying to decide whether to acquire a company; a very brief description of a company’s business model (no financial figures) where you have to advise them why their profits are declining. For strategy consulting, the problem may be expressed in a purely descriptive way – no detailed figures, tables or graphs to pore over, just a statement of the fundamental problem.

How to tackle a case study interview
The aim is to get you to talk through how you would tackle the problem, the assumptions you would make (often financial) and to come up with a thought through, rational response, based on facts and figures, rather than your gut feel. An interviewer is normally there not only to note your answer, but to give you further information when you need it and sometimes to prompt you with questions.

The trouble is, the interviewer won’t lead you through the problem – it’s up to you to put a structure to the case study.

A common problem
Coming up with a structure seems to be the part which stumps many people. Having extensive financial and business expertise, or spending your life delving into specifics (like most researchers) may just lead you off-track, as you ignore the big picture and get distracted by the detail.

A presentation by Boston Consulting Group last year to our PhDs showed how this can happen. BCG gave a clear structure which could be used to tackle a case study, and then role-played it, getting suggestions from the audience. We got there eventually, but many of the suggestions were far too detailed, ignoring the simple structure suggested.

Contrast this with an arts undergrad with whom I used the same case study recently. With a pure arts background, no business experience and only a vaguely remembered economics GCSE to draw on, she was able to make a much better attempt at the problem by sticking to the big picture and using the suggested structure.

One solution
You don’t have to follow this method but the approach which BCG suggested does seem to work for many problems, and avoids you casting around aimlessly for a solution.

The simple structure they suggest for unpicking business problems is: 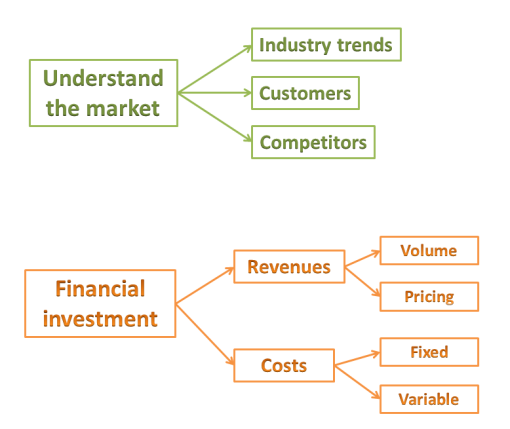 My attempt (!) at a worked example
For example, if the problem is “Should company X try to expand into market Y?”, you would need to understand the market first. You may be able to make a good guess at market trends from common sense or your knowledge of current affairs – eg. in a recession, people may not be investing in new cars, but might be treating themselves with small luxuries (such as chocolate bars!). You can discuss your assumptions with the interviewer and if you’re lucky, they may tell you that you can assume that certain markets are growing by Z% – or just let you run with your assumptions.

Again, you can use your common sense to think about who the competitors might be and who might be the customers. You could also suggest ways you might test out these assumptions. You wouldn’t be expected to know details of obscure markets, but demonstrating a general interest in and awareness of the world of business is a definite plus.

On the financial side, you can either bring in money (revenues) or spend it (costs). If you’re bringing in more than you’re laying out, and it’s a reasonable return on what you’re spending, it could be a sound financial investment.

So, on the “expand into market Y” problem,

That gives you the total revenues you are likely to receive.

What are the costs of say, investing in a new manufacturing plant in the country in which you want to expand? These are the fixed costs – they will stay the same no matter how many cars you sell. With a bit of luck, you’ll probably get some help from your interviewer here.

What will it cost you to make each car – labour, raw materials etc? These are the variable costs as they will increase with every car you make. Again, you might get some help from the interviewer with estimating a rough figure. You’ve already come up with an estimate of the volume you’re likely to sell so you can work out “the fixed + the variable costs”.

So, how much more is going to come in than is going out, and is it a reasonable return on the effort of expanding into a whole new market?

Of course, there are a load of complications you could add in – but keeping it top level is more likely to be successful.

If you have a case interview coming up soon, I hope you’ve been practising! Case study interviews for the major consultancy firms are not the sort of thing you can do with a couple of afternoons brushing up on a few techniques. However, if you’re playing the long game and starting to think about applying next year, here are some good starting points: